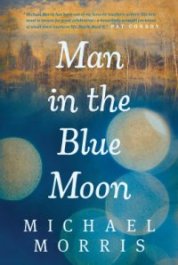 Man in the Blue Moon

“He’s a gambler at best, a con artist at worst,” her aunt had said of the handlebar-mustached man who snatched Ella Wallace away from her dreams of studying art in France. Eighteen years later, that man has disappeared, leaving Ella alone and struggling to support her three sons.   While the world is embroiled in World War I, Ella fights her own personal battle to keep the mystical Florida land that has been in her family for generations from the hands of an unscrupulous banker. When a mysterious man arrives at Ella’s door in an unconventional way, he convinces her that he can help her avoid foreclosure, and a tenuous trust begins.   But as the fight for Ella’s land intensifies, it becomes evident that things are not as they appear. Hypocrisy and murder soon shake the coastal town of Apalachicola and jeopardize Ella’s family.

Praise for Man in the Blue Moon

“Michael Morris has been one of my favorite Southern writers. His new novel is reason for great celebration. Man in the Blue Moon is a beautifully wrought portrayal of small town southern life where poverty, tragedy and human love engage in a ritualistic dance. His portrait of Dead Lakes, Florida, is one of the best portraits of a small Southern town I’ve ever encountered. His main character, Ella Wallace, is fascinating and Mr. Morris is one of those rare writers whose females are as fully formed individuals as his males. Buy it. Read it.” —Pat Conroy


“A magical and mesmerizing page-turner rooted in hardscrabble Florida during WWI, based in part on a true family story…Morris’s narrative is subtle and supple, with overtones of the wry Southernisms of Flannery O’Connor, the rural Florida backdrop of Their Eyes Were Watching God, and a good helping of powerful and mysterious faith. Book clubs should devour this rich, carefully observed mix of characters, time, and place; Morris deserves to break out of the regional-writer box.” —Publishers Weekly (Starred Review)

A Best Book of 2012 —Publishers Weekly

“Man in the Blue Moon evokes the best in Southern novels from Pat Conroy, Flannery O’Connor, Eudora Welty or Walker Percy, with a healthy dose of mystery.” —Miami Herald

“A Place Called Wiregrass and Slow Way Home were both showered with critical acclaim. His 2004 novella Live Like You Were Dying was a finalist for the Southern Book Critics Circle Award…Look for Man in the Blue Moon to eclipse them all. – Florida Times Union

“If you are a fan of southern writing then this is a must read…you only get this combination of a defined place and a recognizable people “once in a blue moon.” – Huffington Post

“Richly detailed and highly visual, Man in the Blue Moon carries readers quickly and completely into the heart of this tight-knit rural community. It is a beautifully written and deeply memorable story of abandonment and loss and of the redemptive powers of hard work, faith, and forgiveness.” –Booklist

“Michael Morris is a wonderful writer with a unique gift – he can break your heart and mend it, all in the same sentence.” —Patti Callahan Henry, author of Coming Up For Air

“The magic of turn-of-the-century Old Florida, in all its pain and natural beauty, has found its voice with native son, Michael Morris. Told in a multitude of voices, all desperate, all determined, Man in the Blue Moon spins a delicate, unforgettable family drama of abandonment and grit and redemption from unlikely sources. Morris is a fifth-generation Floridian, and describes with a pitch-perfect ear a vanishing rural culture of timber-cuts and bank foreclosures, where hard-held faith was not a luxury but a necessity for survival. Florida is lucky to have him.” —Janis Owens, author of American Ghost and My Brother Michael