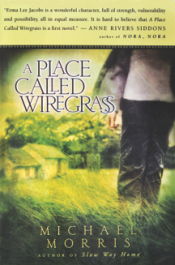 Erma Lee is on the run. Running from an abusive husband. Running from a mother who doesn’t care – never cared. Running from a soul-numbing factory job that embodies a spirit that has held her down her entire life. She and her granddaughter, Cher, flee to the town of Wiregrass, Alabama, where she can escape her past and start over – or so Erma Lee thinks. In Wiregrass, Erma Lee forms an unlikely friendship with Miss Claudia, an elderly socialite who is hiding a few details about her own past. Life in the small Alabama town is different, merciful and promising. Promising, until the day Cher’s convict father arrives in town and then all three women must come to terms with buried secrets.

Praise for A Place Called Wiregrass

“Erma Lee Jacobs is a wonderful character, full of strength, vulnerability and possibility, all in equal measure. It is hard to believe that A Place Called Wiregrass is a first novel.”—Anne Rivers Siddons

“Having done a lot of literacy work in one of the poorest counties of eastern Kentucky, I know the world of this novel. Michael Morris has captured the hardscrabble world of the marginalized and dispossessed to a “T.” The depiction of abusive relationships is very real, as is the friendship, camaraderie, and strength among women. This novel is truly inspiring and uplifting without ever being preachy or didactic. A real page-turner with very strong characters.”—Lee Smith

“A Place Called Wiregrass captures wonderfully the hardscrabble life of simple people in the small-town South, right down to the vernacular…His characters aren’t stereotypical Southerners that you find in some novels. They’re real people with lots of personality and humor, but full of lots of hurt, too.”—Greensboro News and Record

“Run, don’t walk to read this uplifting and inspiring book. Morris’s incredible talent shines through from the very first page of this compelling debut novel of the journey to escape domestic violence and poverty. This man can write!”—Sally Brewster; Park Road Books – Charlotte, NC     BookSense 76 Selection